Well last week we grabbed all of our gear and headed down to Santa Monica and with the help of Dave Jenkins and some generosity tossed in by NEWTEK and their fantastic TRICASTER we captured some real magic. In this Multi-camera shoot we shot America, Richard Page (Mr. Mister) Venice and David Crosby in a stellar performance at Barnum Hall in Santa Monica. Students were up on stage providing the Orchestra section and the choir and a magnificent performance. 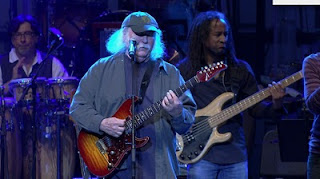 Using Newteks Tricaster 850 alongside of our Panasonic camera arsenal gave us a a superior High Def line edited performance! Dave Jenkins was or TD with Matt Levitz assisting with Queues. Sure we'll have to do a little mopping up in Post but no where near what we have had to do in the past.

Special thanks to Doug Armstrong of Touring Video for the mondo lens & viewing monitors and SAMY's Camera as always helping out with camera media every year! 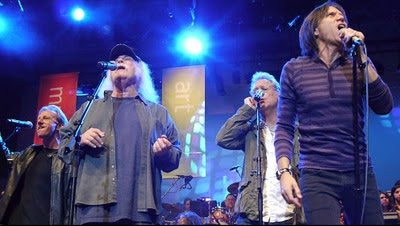 More on this later...gotta run to the next shoot!

Posted by OnTheWave at 8:05 AM No comments:

Can you ever imagine that it would be possible to shoot a LIVE CONCERT with 15 High Definition cameras on a shoestring budget!!?? Well I'm here to tell you that's exactly what we did at the Jeff Bridges and T-Bone Burnett concert. It took place in beautiful Santa Barbara as they performed to a Sold-Out crowd at one of the oldest theaters in California,, The Lobero Theater, for the 200th "Sings Like Hell" Concert series created by Peggy Jones. The band had Buddy Miller, David Piltch on Bass, Jay Bellarose Drums, Chris Pelonis Acoustic Guitar and Greg Leisz on pedal Steel. The concert was pretty much all of the Oscar award winning soundtrack for Best Film and Best Actor "Crazy Heart."

Here's the Layout with front
& back Camera Angles: 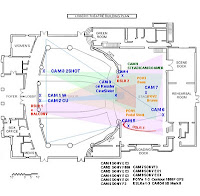 So lets get down to the logistics... Working side by side with brilliant Director-Filmmaker & Cinematographer Alan Kozlowski, I had the unique opportunity to DP for this history making event! 15 cameras!! No switcher, no line cut! We setup zones for coverage with complimentary pairs of cameras Stage left and Right and Long zoomers back of the house. The arsenal consisted of a Sony F800 XDCAM HD with stabilized Fujinon HA42x9.7mm HD zoom, 3- Sony EX1's, 2-EX3's one with FUJINON HA25x11.5mm HD long zoom and the 2 brand spanking new Sony F3's! Add to the mix 3-Contour 1080P pov's, 3-Canon DSLRs, Kessler cinesliders and a Partridge in a pear tree!!