The events in the Gulf of Mexico are still making major headlines daily almost 10 months after it all began. The reality of what we saw as filmmakers continues to reveal itself each week. The latest report covering the deaths of nearly 60 juvenile Dolphins spread out along Gulf beaches over the last 8 weeks, nearly 10 times the normal observed mortality rate.

This report by Vivian Kuo, CNN just in.

Posted by OnTheWave at 10:14 AM No comments:

SUPER-UBER MICROBES EATING ALL THE OIL

Something else noteworthy has been surfacing in the news as of late:
SUPERCHARGED OIL EATING MICROBES, bacteria consuming the Oil at off the scale rates of consumption...wow ! really? we keep hearing about this. Were they invented in the Lab? Well uh  no... Did it's overnite superpowers give birth in the Gulf? Well uh maybe? All that Oil, well most of it is gone! Well uh no, not quite. It's all either sitting on the bottom in a nice cocktail mix of dispersant and oil, hovering around in giant moving plumes, ashified remnants of surface oil set ablaze and oh yeah all over the barrier islands and marshes in the Gulf. That's right we've seen it ourselves. Uh but they keep telling us it's gone... Now why is that?  I wish I had an answer for that one...

What we do know according to our journalists is that NO ONE COULD SHOW PROOF POSITVE IN ANY LAB Macondo OIL EATING MICROBES, that is actual oil from Deepwater Horizon being consumed at UBER rates by Super bacteria.
Someone please show us!

Our Scientists like Samantha Joye and many others who do have scientific proof and evidence have shown otherwise. It's still here, it's impact will be long lasting. It's current impact has already destroyed, yes KILLED sea life in the deepwater. We now need to be looking at a solution and at ways in which mankind can help replenish what was taken away.


SANTA BARBARA CHANNEL has oil eating microbes. That's right and they are able to keep approximately 6600 gallons per day of natural oil seeping into the channel at bay according to David Valentine at UCSB's Marine Science Institute. If we gave these microbes some vitamins could they really suddenly grow to handle the consumption of over 500,000 gallons of oil a day? Could this happen without a collapse within the system? I'm not a scientist but it does not seem possible, the levels of Oxygen needed to support and promote this type of oil eating genetic monster of a bacteria is neither attainable or sustainable. This activity would yield massive dead zones that could be observed in the Gulf environment.


What is your opinion?

Posted by OnTheWave at 1:24 AM No comments:

So I asked around WHOI "What exactly can we compare 200 Million gallons of oil with in our modern world to get a better understanding of just how much oil actually spilled into the Gulf of Mexico from the Macondo well. Well you might be very surprised by the answer I got from Ken Kostel of WHOI!


The volume of the ocean is about 310 million cubic miles, which is a cube about 680 miles on a side--or a sphere a little over 500 miles in diameter.

The amount spilled is 200 million gallons, which works out to .0002 cubic miles, or a cube just 300 feet on a side--or a sphere about 370 feet it diameter.
OK thanks Ken! So lets look at some graphical comparisons to better visualize the ENORMOUS impact this amount of oil has had upon the environment.

One thing I would tell you is that I had less than a drop of the oil on my thumb during our filming of the Marsh lands in Bay Jimmy, Louisiana. That one drop as I rubbed it between my thumb and forefinger spread out and when I rubbed both my hands together I received a very nice sheen completely covering the palms and fingers of both of my hands! LESS THAN 1 DROP !

Posted by OnTheWave at 12:55 AM No comments: 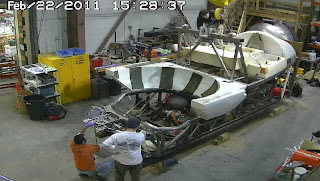 Woodshole Oceanographic Institute has an ALVIN webcam which shows the DSV being rebuilt live in its hangar at Woodshole. After enjoying the unique opportunity working alongside of Alvins crew and of sitting inside of Alvin and filming while aboard the Atlantis I have to say that this is really an amazing opportunity to witness via the internet. Looks like the same crew onboard Atlantis are doing the work, Bruce, Mike, Dave & crew all hard at work!

What is most incredible to me is that right now the United States is without a Manned DSV of Alvins capabilities in depth for the first time since 1964 !! So these guys at Woodshole are working long hard hours to get Alvin back into the water ASAP.

In the aftermath of Deepwater Horizon all indicators are pointing towards an uncertain future in regard to the overall impact the oil, which is still on the bottom of the ocean, will play in the future of the Gulf. Evidence is conclusive that the oil on the bottom has killed most of what it has come into contact with. We need manned DSV's to better explore and better understand what is going on in our Oceans but for right now the scientists are analyzing all the critical data they were able to gather before Alvin was retired and the results are coming in more rapidly as of late.

I for one would like to thank WHOI for all they do and for their continued efforts and strides their organization makes on a daily basis on behalf of our planet Earth and all the life it sustains.  Let's get Alvin back to work as soon as we can!