For the last 2 weeks we have been monitoring juvenile White Shark activity along the Santa Barbara County coastline and specifically from Carpinteria beaches on up to Goleta beaches. You can view a brief video sequence by clicking here. 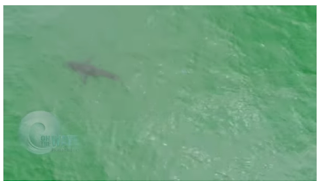 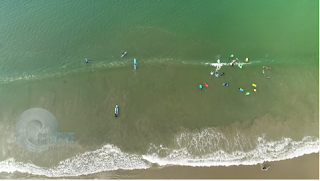 In one day alone we spotted 6-8 Great Whites sharks heading towards Loons. On two of the monitoring days we spotted juvenile whites less than 20ft. from the shoreline and in the lineup. At the same time three separate surf camps participants were in the water. We quickly evacuated all kids in the water at Santa Claus/ Padaro Lane twice during the week 7/9-7/15. The sharks made no aggressive moves as they ventured closer and closer to shore and were observe consistently in the 11am to 1pm timeframe over the course of 5 days. They always seem to come from the east along and headed up the coast. At one time 6-8 were observed near Loons. They appear to be looking for Rays and Grunion, both abundant right now. All were in the 5-7ft range and a couple around 10-12ft +. So mostly juvenile. The 2 recent attacks within 24 hours may be their testing their hunting skills for bigger game as they could be changing from juvenile into the young adult phase and luckily failing in their attacks.
Posted by OnTheWave at 11:01 PM No comments: