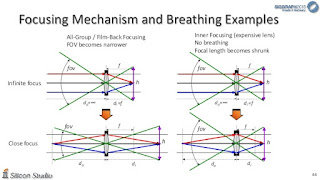 Simply stated it is a phenomenon seen in video and most common on a rack focus where the image appears to breath as focus is being applied and is exaggerated through the use of Zoom lenses.. In other words the size of the image varies during the focusing from one object to another. This makes for undesireable imaging in your video. Is their a workaround with zoom lenses? Not really and this brings us to the issue of using adapters and 3rd party lenses deployed on another manufacturers camera body.


SCENARIO
The new SONY A9 is a fantastic camera but throw a metabones adapter and Canon EF L Glass ZOOM lenses on it and be prepared to deal with the breathing issue. Place the equivalent SONY zoom on the A9, A7 etc. and the problem is pretty much non-existent. So if you are considering switching from one camera manufacturer to another and are counting on utilizing your expensive existing lens collection through adapters, be prepared as you will need to think twice when it comes to shooting video.

THINK PRIMES, CINE LENSES
The best solution here of course is to use primes but if your existing lens collection for example consists of Telephotos, zooms like 16-35mm, 24-70mm, 70-200mm, etc. lenses then you really need to re-evaluate your decision to switch cameras and again this strictly applies to video on a DSLR, mirrored or mirrorless.

The focal length is the distance between a hypothetical single-element lens and a sensor required to reproduce a given magnification of image. This is unrelated to the distance from the sensor to the flange.
Posted by OnTheWave at 8:25 AM No comments:

SONY A9 vs Canon Mark 5D MarkIV, + link to Sony A9 manual

OK well we got our hands on a NEW Sony A9 and after being an avid Canon Photographer and user well it looks like the SONY A9 is the clear winner here.
First off here's the LINK to the Sony A9 Manual.

My first photgraphic camera was the CANON AE1, then the 10D all the way up the Canon chain to 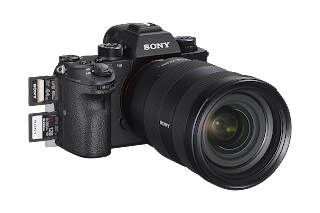 the C300 and as of late the 5D Mark IV. Lets remember Canon pioneered the entire DSLR video market and I was on board from using it to train and to shoot video for documentaries and feature films, it was mindblowing! So Canon did dominate the space for quite sometime but it seems they are not keeping up with the competition. The innovative video side of the house really shifted to the C line of Canon cameras and they took their eye off the ball for the current DSLR and Mirrorless marketspace. The slide seemed to have started with the 5D Mark III which had noticeably softer images and a lower dynamic range than many of its competitors. Along comes the Mark IV with the 4K feature apparently to even the playing field but major issues with that feature. The 4K image is cropped!! So be ready to do the math on your lens focal length and matching up shots. The worse one is the ridiculous size of the media files (500mb/sec) along with the expensive FLASH Cards required to capture 4K. If you want a video camera that competes with what's out there then I personally do not believe the Mark IV is for you. Even the dynamic range was disappointing leaving very little detail in the shadows compared to even a Sony 6300.

So for the first time in over 45 years of shooting with Canon I have switched to the Sony A9. I still use all my Canon glass and it works great with the Metabones EF to E mount adapter. So for those of you on the fence like I was well it may be time to switch. I still have my Mark II as I just found myself unable to part with Canon 100%, yep ok an emotional, nostalgic decision I guess but I do still like the ergonomics of the Canon over the Sony. One note you can spend a rather high price tag of 129.00 for a grip accessory for the A9 for a bigger more natural handheld feeling.

COMMENTARY ON SONY A9 ACCESSORIES

The Multi Battery Adapter Kit is a 4 battery DC supply IS NOT AN AC POWER SUPPLY TO POWER YOUR A9. It is strictly an extended running time for your A9.Bottomline if you need to run your camera all day with no ACA power available then this is the product for you. Bewarethough while it says RAPID CHARGER it actually take 8 hours to charge all 4 batteries when NOT in use as it charges sequentially and NOT all 4 at once.
Come on SONY 398.00 this should supply power direct from AC to the camera same as you do for all your video cameras. What is SONY thinking here??

XLR adapters-598.00 and 698.00 both come with mics...Why? Would be nice to reduce the price substantially and NOT include the Sony mic. Juice Box and Beachtek will be happy as it really shouldn't compete with their offerings not at that price point.

Posted by OnTheWave at 2:30 PM No comments: